Welcome to the Imagine Dragons Wiki!

This community was created by the fans, for the fans, and is dedicated to housing a useful and informative database for all subject matter related to the indie/alternative rock band Imagine Dragons. Our goal is to collaborate with other fans in order to build a reliable, accurate resource with as much detailed information about the band, its members, and their music as possible. All are welcome to join in and contribute here, so long as edits are constructive, discussions are positive, and both are relevant to this music group.

For more information about how you can get started here, please check the Helping Out section below. Thanks for stopping by! 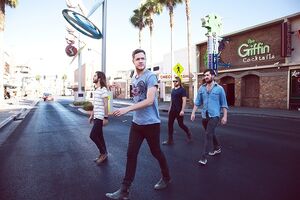 Imagine Dragons is a rock band from Las Vegas, Nevada. They gained exposure after the release of their debut studio album, Night Visions, in September 2012. Since then, they have gone on a world tour, and gained exposure on major late night shows like The Tonight Show with Jay Leno, Jimmy Kimmel Live! and Late Night with Jimmy Fallon. Billboard magazine named them "The Breakthrough Band of 2013," and Rolling Stone magazine called their single Radioactive "the biggest rock hit of the year."

In 2008, lead singer Dan Reynolds met drummer Andrew Tolman at Brigham Young University, where they were both students. They recruited Aurora Florence, Dave Lemke, and Andrew Beck for their band. The band recorded an EP, Speak To Me, and a few demos, but Aurora Florence and Andrew Beck left after less than a year. In 2009, Tolman recruited longtime high school friend Daniel Wayne Sermon, who had recently returned to his hometown of American Fork, Utah from the Berklee College of Music. Tolman later recruited his wife, Brittany Tolman, to sing backup and play keys. Sermon then recruited another Berklee music student, Ben McKee, to join the band after recording their first EP, Imagine Dragons (EP). With Reynolds singing lead, Imagine Dragons won BYU’s "Battle of the Bands" and other local competitions. The band released another EP titled Hell and Silence in 2010, recorded at Battle Born Studios, in Las Vegas, NV.
Read More 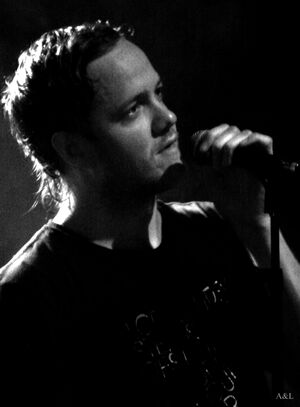 Daniel Coulter "Dan" Reynolds (born July 14, 1987) is an American musician and the front man of Imagine Dragons. He has also released an EP titled Egyptian - EP as a duo with his wife Aja Volkman, who is also the lead singer for the band Nico Vega, under the moniker Egyptian.
Read More

We are currently housing 101 articles, and 89 files.

We need YOU to help us expand and add articles to this wiki!

If you're new to Wikia, please use the above links to get started.
If you already have editing experience, and you have an article relating to Imagine Dragons to contribute, use the box below to create it: <createbox>width=30</createbox>
If you're looking to help with cleanup, you can start here:

'Hell's Kitchen': Why was Fabiola eliminated? Gordon Ramsay says she 'had passion and not much else'  MEAWW... 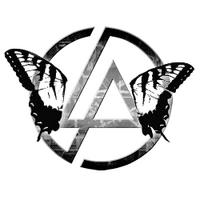 Go to these sites for info or for help with your own wiki!

Want your community included? See how!

Retrieved from "https://imaginedragons.fandom.com/wiki/Imagine_Dragons_Wiki?oldid=5200"
Community content is available under CC-BY-SA unless otherwise noted.